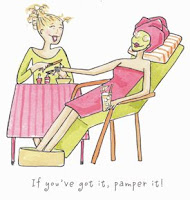 So I was with my sister and a friend on Friday night and they were all excited about this new nail salon which offered a manicure and pedicure for only $20.

And, although I'm not really a mani/pedi kind of gal, there was a wedding (bite your tongue. . .  may my daughters never want one. .  .) to go to on Saturday and I got to thinking that I might just employ a little outside help to pretty myself up.  Now keep in mind, it was only the mani part of the mani/pedi I was interested in, but I've never been one to turn down a bargain . . . and why pay $12 for a mani when you can get the whole mani/pedi for just eight bucks more. . . and so, on the way back from buying my suck-it-all-in-unitard-body-shaper and black support hose at the mall, I did the unthinkable and drove unscripted into the parking lot of a new nail salon, riveted by the sign which read . . .

And, although I may be accused at times of being an impulse shopper, I have never before been an impulse mani/pedi/ier.

And for good reason.
I forgot that I don't like people touching me.
But somehow the thought of the wedding (bite your tongue for even mentioning the word. . . may my daughters never want one. . . ) and the special price led me to dive into that pedi chair without prethinking the consequences.
And, hoping to get past the whole I hope she won't notice that my feet smell thing by quickly immersing them in the water, the nail attendant promptly pulled them out again and said, Oh My God!
What's wrong?  I queried.
Oh My God!  she re-uttered.  You need  Oh My God!
Oh My God?
There!  she said, pointing to the salon services menu and the item that read Oh My God! Callus Remover.
$35 for mani/pedi with Oh My God!
Are you sure?  I asked.
Positive! she answered.
And so for the next hour the poor nail attendant invoked the name of God as she and her saran wrap attempted to remove the calluses from the bottom of my feet.  And after both she and I had lost a good five pounds in doing so, she turned her attention to my legs.
And it hit me.
She was going to massage my legs.  I hadn't shaved those mother-f***ers in at least two weeks!
Not to mention my toes!  My biggest piggies hadn't seen the edge of a shaving blade since the last time they went to market. . .
Oh. My. God!
And so it was that the unsuspecting pedicurist and her hot stone spent the next ten minutes of her life caressing my prickly and stubbly calf muscles, and the following ten trying to apply nail polish while resisting the urge to braid my three errant toe hairs.
And by that time I was praying to a merciful God to grant me another curist for the mani part, but it seems that praying to God to remove your calluses does not give the supplicant much clout in choosing her next victim, for that same girl took one look at my misshapen and bitten-down fingernails and nearly cried.
But thankfully there wasn't a spa service entitled Go to Hell! and so the poor girl could only ask, Same color?
Yes, same color.  I replied sheepishly.
And when the time came to pay for all this fun, I found that the $20 mani/pedi sign was, indeed, truthful advertising . . .  for although I paid $35 to the salon for its special services, I coughed up an additional $20 in the form of a tip to that mani/pedi/curist to keep her from laughing at me if God ever grants me the grace to walk back through those doors again. 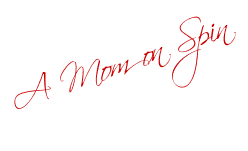 Oh. . . and just another little tidbit of information. . .

All night long at the wedding (may I never have to pay for one. . . ) my feet were slipping right out of my shoes. And the unitard didn't reach down to my heels, my friends.   Nope. . . .without my trusty calluses, my shoes were suddenly too big.

Email ThisBlogThis!Share to TwitterShare to FacebookShare to Pinterest
Labels: all time favorites, i can't make this stuff up, it's my life and you're welcome to it
Newer Post Older Post Home