As I think you know, I have decided to become a minimalist,   But I have realized that - not only does it require a lot of energy to declutter a house you have lived and raised three children in for 32 years -   the actual process requires the spending of a lot of money.

First you need to buy a book on minimalism.  Then you proceed to throw/give/donate away almost everything you have owned or worn for the past 32 years and replace it with minimalist-looking stuff.  Like plants.   Plants comprise the elegant decor in almost every minimalist video and appear to be a must-have in large numbers.  Then, of course, you need the appropriate watering can for said plants.  Then you need to replenish your wardrobe in capsule-like fashion, which means solid-colored clothing from fair trade manufacturers in shades of black, white, and gray.  It’s a good thing that this capsule wardrobe only has about 50 pieces in it because it would be frightfully expensive if not.  Then you need to replace the colorful throw blankets you tossed out from your fair-trade weave basket in your living room with off-white throws only.   And you absolutely need agate bookends and the appropriate books to display between them.  It’s a good thing I happen to love the classics and hardcovers, so I just needed to pick those with the right size, color, and hue.  Except for my W.B. Yeats poetry collection.  It was a softcover and would not do.  I downsized to a small hardcover in black and white.  Fewer poems, but isn’t that what minimalist is all about?   A good thing, too, that my dishes were white and my living room coffee table was shaped like a giant African drum.  Big score there.   And I already employed essential oil diffusers, herbal teas, incense, Himalayan salt lamps, and feng shui elephants in my everyday living.  And, speaking of elephants, I somehow decided that a person like me should then donate more to charity organizations.   You know, the right ones -  so I adopted an orphaned baby elephant.   And then I purchased a keepsake elephant necklace from their website to commemorate the day I adopted Kiombo from the Sheldrick Wildlife Trust.🐘 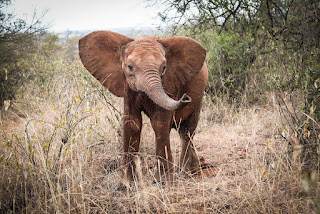 The point I am making is that I discovered that I had spent a lot of money on items I was supposed to be detached from.  And I was losing sleep forever planning what I was going to throw out and how I was going to arrange my living space “just so” to prove that I, too, could become clean and minimal.

What WAS I doing?  So I made a pledge to myself that I would have a “No-Spend” February in order to break this cycle of obsessive thought and spending.

Today is February 2nd and it feels like day 39 of a long and lonesome lent.